YouTuber Paras Singh has come into the limelight due to his controversial statements. Recently, Paras made racist remarks on MLA from Arunachal Pradesh belonging to the Indian National Congress Ninong Ering on his YouTube channel. Actor Rajkummar Rao slammed YouTuber Paras Singh after he apparently used a racial slur against MLA.

Rajkummar Rao reposted Stree director Amar Kaushik’s note on his Instagram story. The actor wrote an objection to the remarks made by Paras Singh by saying, this is not a tolerable comment. Amar’s post read, “Being ignorant about your own country and its region is stupidity itself, but when that ignorance is expressed in an offensive manner, it becomes toxic. We all need to call out and condemn such ignorance in one voice and make all idiots understand that it is NOT ACCEPTABLE ANYMORE.” 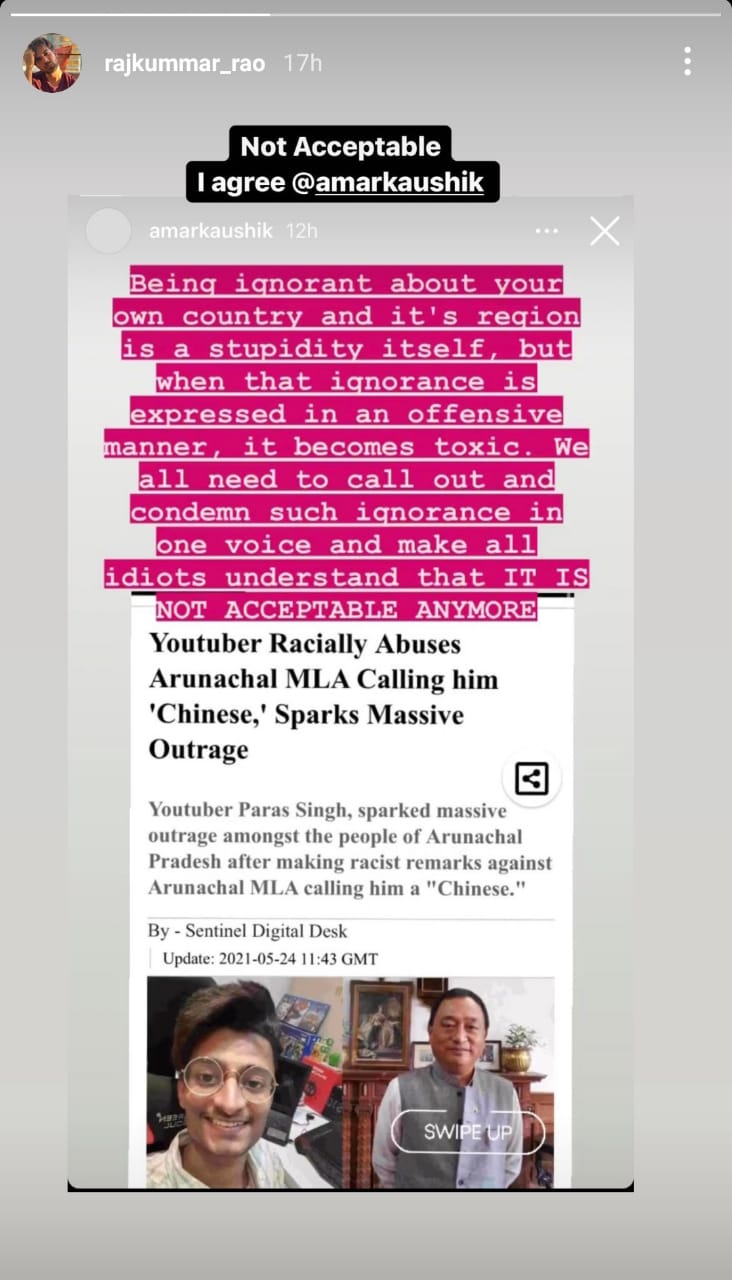 Paras Singh’s YouTube channel goes by the name Paras Official. Paras apologized to the MLA Ninong Ering for his controversial comments and removed the video from social media. Paras also requested people not to target his family for his mistake.

Paras Singh’s mother too, with folded hands, has apologised and requested everyone to forgive her son.

Meanwhile, Punjab Police is reported to have arrested Paras. Indian lawyer and politician from Arunachal Pradesh Kiren Rijiju wrote on his Twitter, “Punjab Police searched & taken Paras Singh under custody. Arunachal Pradesh Police team is reaching Punjab. I’ve spoken to Police Commissioner of Ludhiana for urgent Judicial process for transit remand as it’s inter-state arrest so that he can be brought to Arunachal Pradesh.”

Punjab Police searched & taken Paras Singh under custody. Arunachal Pradesh Police team is reaching Punjab. I've spoken to Police Commisioner of Ludhiana for urgent Judicial process for transit remand as it's inter-state arrest so that he can be brought to Arunachal Pradesh. https://t.co/jm3WFAeVBL

Recently, Congress MLA Ninong Ering wrote a letter to the Prime Minister of our country, Narendra Modi, demanding a ban on the re-launch of the Player Unknown’s Battlegrounds (PUBG) mobile game in India, after which the YouTuber made the offensive comments.

A report in Hindustan Times states that in his video, Paras Singh commented that Ering, a sitting MLA, doesn’t look like an Indian and even his name “sounds foreign”. He also said people from Arunachal Pradesh don’t look like Indians and the state was probably a part of China.

The HT report further adds that Paras Singh was sore that Ninong Ering had written to Prime Minister Narendra Modi to seek a ban on a gaming app called Battlegrounds Mobile India, saying it was a new version of PUBG, another game which was banned in India earlier. His YouTube channel, which focuses on video and online games, has 4,55,000 subscribers.

Pratyusha Chhajer : ‘SS Ballet Academy will be a platform for dancers to…

Pratyusha Chhajer : ‘SS Ballet Academy will be a…

Vidyut Jammwal ranks with Bruce Lee and Jackie Chan on…

“My job is to act, I don’t put my brain into what people…