Here's what made the 'Revenge of the Artist' all the more spine-chilling! 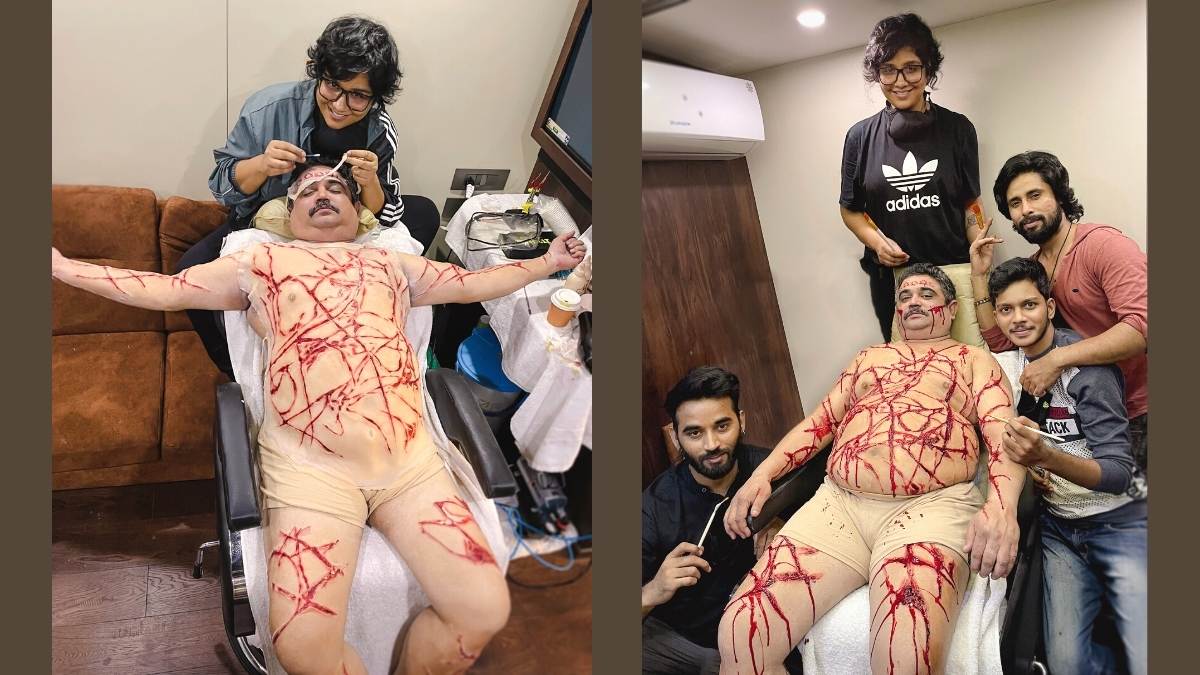 It is no secret now that writer-director R.Balki’s film Chup: Revenge of the Artist has hit the bulls eye. One of the reasons Chup has resonated with the audiences (and the critics) is because it manages to send shivers down the viewer’s spine with its chilling killings.

For a suspenseful movie like this, it is very important to get the aesthetics of the gory killings shown in a believable and jaw-dropping manner.

In an interview, R.Balki says that “Unlike in most films, these are constructed murders. By that I mean, it’s about how I kill them. It’s almost a creation of art, murder as art. To do that you need an artist — not just a makeup person or a prosthetic person — but a person who truly understands.”

Of course none of the body-cutting and mutilating is real in the world of make believe. “Designing murders, something I’ve never done before, is as challenging as designing characters,” says National Award-winner Preetisheel Singh D’souza who has created all those cuts, slashes, bodies and organs you see in the movie.

Preetisheel explains that since there are different type of murders that happen in the film and every murder has a story, the murders had to be very clean, and done in an artistic manner to go with the subject of the film. They had to express the story behind them, she says.

Not many know that as part of the research of the film, Preetisheel and her team at Da Makeup Lab visited places like JJ Hospital, met up with some doctors and checked up on nitty-gritties about bodies, organs et al.

“In the film, we portrayed a lot of clean cuts, neck stabbing, normal kind of stabbing, we had a very elaborate silicon piece which went over the full body for a murder depiction at an art gallery. We also made a lot of body organs, like the heart and liver and a lot of intestines,” informs the makeup and prosthetic wiz.

R.Balki remarks, “I don’t have a reference to these kind of murders anywhere else. These are new murders that I thought of. So I told her (Preeetisheel) there will be no VFX on this particular film. I want to do everything live. And she’s done an incredible job.”

“Artistic murders — that’s the first time I’ve heard of something like that,” smiles Preetisheel, who thinks very highly about R.Balki as a creative filmmaker. Talking about the film, she adds that it’s a totally different masterpiece created by R.Balki and very different from his other films.

Preetisheel, along with her partner-husband Mark D’souza, runs the state-of-the-art hair, makeup and prosthetic studio Da Makeup Lab (DML) in the elite Versova locality of Mumbai. When it comes to makeup and prosthetics, many of the top filmmakers in Bollywood have relied upon her artistic work and character designs.

DML has provided its services for some of the who’s who in Bollywood, including superhit movies such as Bajirao Mastani, Padmaavat, Housefull 4, Chhichhore, 102 Not Out, Gangubai Kathiawadi and Pushpa: The Rise. The studio is now working on the sequel to Pushpa as well as the upcoming Shah Rukh Khan film Jawan.

Meanwhile, Chup has been touted as a brutally honest and haunting psychological thriller from R.Balki. The narrative has its own beauty and the tight screenplay ensures that the audience is glued to the screens right from the word go. The interval block and the climax sequences have been hailed as top-notch. The serial killer and his various activities are depicted with a finesse that would make one’s skin crawl. Moreover, the references to maestro Guru Dutt’s yesteryear classic Kagaz Ke Phool are intertwined cleverly and very effectively with the narrative.

“It’s a strange mix that combines well. Gruesome, barbaric killings but also the bigger picture where cinema is a celebration,” writes veteran journalist and editor Bharathi Pradhan in her review on Leheren.

India Today’s review by Roktim Rajpal headlines it ‘Film critics, beware. You’re about to lose your organs.’ “Given the genre, violence is an integral part of the narrative. None of the scenes try to shock the audience,” it states, praising the movie.

However, film critic Saima Parveen makes a kinda contradictory statement in Maps of India when she writes, “The unique and exciting plot of the movie can attract the audience. The movie is watchable, but those who avoid violence should wait for another movie.”

“There’s a scene that closes the first half which sees him (the artist) kill one of his victims by slashing a specific artistic design into their body. In how it’s shot and performed, it’s a rare shining moment of gloriously unsettling violence…” says film reviewer Suchin Mehrotra in Hindustan Times.

Even actor Dulquer Salmaan who plays the lead along with Sunny Deol and Shreya Dhanwanthary in this extraordinary R.Balki slasher-thriller says that he felt the murder scenes were “definitely disturbing.”

In an interview to The Telegraph, he remarks, “Every time I am slicing through somebody, it had to be convincing. And to make it convincing, I had to believe myself it was real. We clubbed all the murder scenes together and shot them in one go and that was the hardest for me. At that time, I didn’t want to meet anybody. I told all my friends I was on a break from meeting them. Also, in those scenes, I am speaking a lot and I had to memorise a lot of lines. During those days of shooting, it felt quite heavy.”

Dulquer adds, “But that was nothing compared to my co-actors who my character was slicing up. They had heavy make-up and prosthetics on and had to sit on set for hours. I would feel genuine concern for them.”

The prosthetic expert Preetisheel Singh D’souza says, “It’s been my privilege to work for this film. Balki Sir is a visionary and his style of film-making always brings something new to the table and touches the right chords with the audiences.”

“The bodies were an integral part of this film. Unlike the past, nowadays we are witness to a lot of stark realities that somehow land up on the internet. So if a film does not depict reality in a very believable manner, the audiences might find the scenes tacky. We paid a lot of attention to minor details when we designed the bodies and slasher cuts for the murder sequences in the movie,” she informs.

Mark D’souza adds that “Chup has finally got everyone including the critics, talking — that that too, positively. That means a lot for us at Da Makeup Lab. See, the film combines the suspense-thriller genre with romance and dark humour. When people come up and say that the murders were goosebump-inducing, it feels like such a big compliment for our efforts with prosthetics.”

Ah, indeed. The critics and even the audiences only have good things to say about Chup. The film has reached a benchmark for intelligent and intriguing film-making, and that says a lot for everyone associated with it.

Not to forget, it also marks a sort of revival for the Hindi film industry after the #BoycottBollywood trend, as it has emerged as the first successful flick after a lot of tough times the industry witnessed in the last few months.